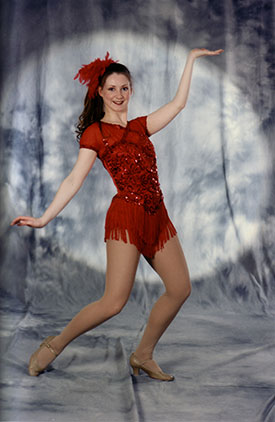 Originally from Timmins, Ontario, Jessica began her dance training at the age of four, in Tap and Ballet, and later in Jazz, at the Mick School of Dance. After graduating from high school, she attended the Ryerson University Dance Program where she studied under the artistic direction of Nadia Potts. From there, she pursued Musical Theatre training at the Randolph Academy for the Performing Arts. Under the guidance of working professional faculty members including George Randolph and Ron Singer, she graduated with a Diploma in Musical Theatre in December of 1999.

Throughout the years since Jessica’s arrival in Toronto, she has had the pleasure to meet and study with incredible tap dancers; the late Gregory Hines, Dianne Walker, Lane Alexander, Jason Samuels Smith, and Anita Feldman to name a few. Jessica was a member of the National Tap Dance Company of Canada for five years. On tour, the company travelled across Canada showcasing the works of Dora award-winning choreographer, William Orlowski; three shows included Oliver Button Is A Sissy, The Tin Soldier, and a choreographic collaboration, Feats of Feet. Jessica is currently a member of What’s On? TAP!, a Mississauga-based tap dance company under the artistic direction of Kim Chalovich.

In 2007, Jessica headed back up to Northern Ontario to choreograph for Lock and Keynote Productions. Led by Founder and Musical Director, Shari Porter, the three week Musical Theatre workshop welcomed children from Cochrane, Timmins, and the surrounding area, and gave them the chance to sing, dance, and act in a professionally directed show. Jessica has choreographed a number of productions with DeGazon Music Studios; a school dedicated to teaching school-age children instrumental music and musical theatre by giving them experiences with professional directors, musicians, and choreographers. Works included Bye, Bye Birdie, The Sound of Music, and Joseph and the Amazing Technicolor Dreamcoat.

For the full biography of Jessica Westermann, please click here.